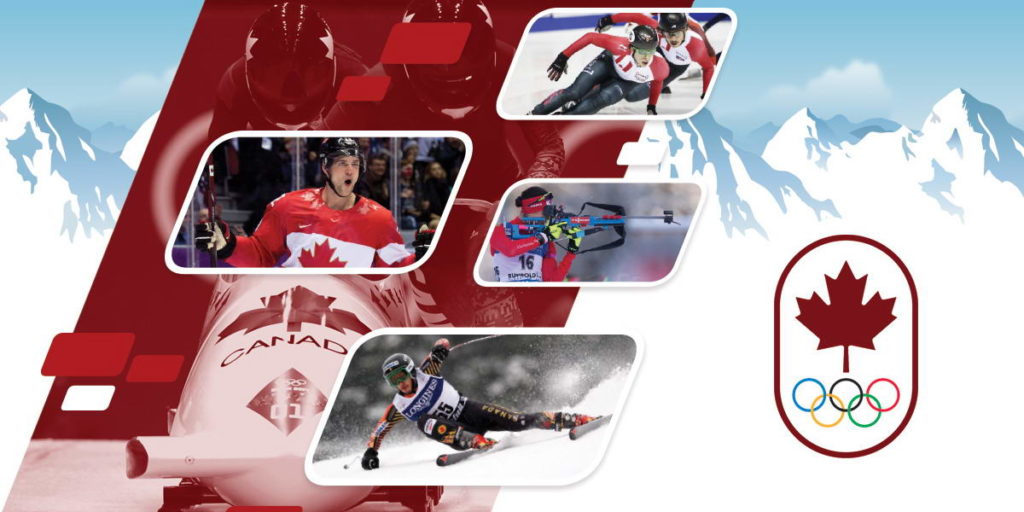 Hoping to top the medal Count of 26 won in Vancouver in 2010, here are just a few of the top Canadian athletes to watch this Olympics:

With many prophetically claiming that Mikael Kingsbury is truly living up to his royal name, the 25-year old from Deux-Montagnes, Quebec is Canada’s premier mogul skier. Bringing into the Games a 2014 silver medal from Sochi, two world championships, and 48 World Cup wins, Kingsbury is positioned to dominate the moguls this winter in South Korea.

Along with Heather Moyse, Kaillie Humphries became the first Canadian woman to win gold in Olympic bobsleigh at the 2010 Vancouver Winter Olympic Games. The duo returned for an encore gold-medal performance in Sochi, earning them the honour of bearing the Canadian flag during the closing ceremony. The looming question for Humphries this year: Can she make it to the top of the podium for the third straight year?

It’s hard to top capturing gold in front of your home crowd. Still gliding on the thrill of doing just that in 2010, figure skating pair Tessa Virtue and Scott Moir head to South Korea this year stronger than ever. After Virtue overcame multiple surgeries due to leg pain, which made it difficult for her to walk at times, Virtue and Moir recently moved their training camp to Montreal in order to be trained by two-time silver medalists Marie-France Dubreuil and Patrice Lauzon. Look for them in the opening ceremonies of this year’s Winter Olympic Games as they were selected flag bearers for Team Canada.

Don’t miss one minute of Max Parrot as he pushes the limits on the slopes this winter. Consistently inventing new moves each season, Parrot most recently became the first to land a Switch Quadruple Underflip in competition at the X Games in 2017. Although he finished 5th in Sochi, Parrot is a strong contender in this year’s Winter Olympic Games.

Nothing but gold and silver so far for Charles Hamelin. Making his fourth appearance at the 2018 Olympic Games, Hamelin is a three-time gold medalist. Wowing the crowds at the 2010 Winter Olympic Games by winning two gold-medals in a 30-minute span in the 500m and 500m relay, Hamelin is a veteran on the short track.

Canadians are hoping to see more air-guitar celebrations this winter by men’s cross-country skier, Alex Harvey. Known for this signature celebratory move, Harvey is the most successful cross-country skier in history outside of the Olympic Games. This year, however, Harvey hopes to change that as he follows his tracks right to the top of the podium.

Known for her propensity to score game-winning goals in gold-medal Games (Vancouver 2010 and Sochi 2014), Canadians are sure to see Marie-Philip Poulin making an impact on the ice this February. Known as the “Slayer of the United States,” Poulin is hoping the domination continues at this year’s Winter Olympic Games.

If there ever was a year for Canadians to dive headfirst into the Olympic Games, this is the year. “We head into the Games probably with our best medal potential ever,” Own the Podium chief executive officer Anne Merklinger said. “The greatest performance for us would be to win our most medals ever.” That magic number? 27!

The Best Place to Watch the Winter Olympics Action

With great food, weekly specials, over 40 beers on tap and over 25 big screens to watch this year’s Olympic Games, Yates Street Taphouse, located in downtown Victoria, is the ideal place to watch our Candian athletes shine in the company of fellow Canadians.

And so, this February 9-25, grab your friends and join us at our house: Yates Street Taphouse to cheer on our fellow Canadians towards a record-breaking performance at this year’s Winter Olympic Games.

Fun Things to Do in Victoria at Night: Music Bingo Every Tuesday Night

If you’re looking for fun things to do in Victoria at night on a Tuesday,…

Your Introduction (and Invitation) to an Irish Whiskey Hooley